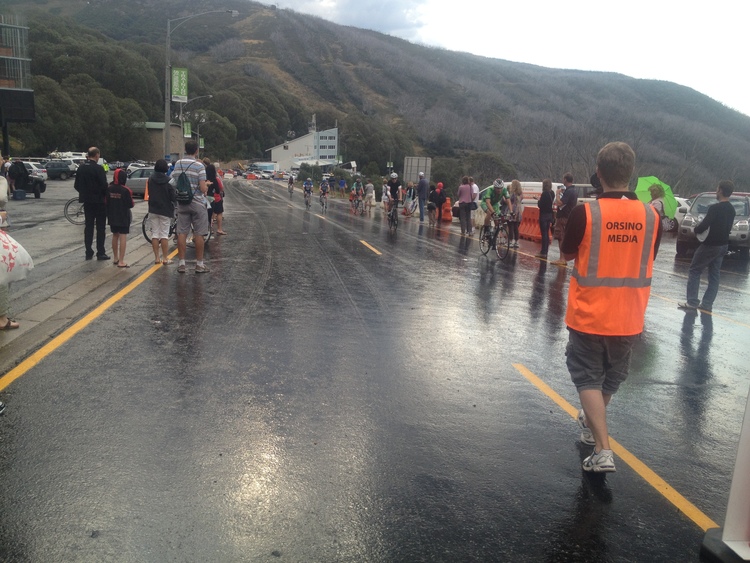 It doesn’t seem to matter what the task over the years, study, planning or just writing, “think at night, do in the day” has always served me best, so the floor of our room had various clothing and riding paraphernalia neatly laid out including a pre-packed and pretested jersey. Barring the fact that I had forgotten my mobile’s code, rendering it useless for the Strava updates, all went to plan, stuffing ourselves with long burning carbs for breakfast and joining the start line by 6.40am.

Very shortly thereafter we were off down Falls in the semi-light, but the “new” bike felt a lot foreign, so being tentative meant even Lloydy was getting away from me as the pros were humming past, cutting corners at 60, 70 and no doubt more. No problem, stay in control, let them go, it’s a long day.

We managed to regroup as we rolled over Fall’s lower crests and valleys, tagging on to a few riders as we went. Mount Beauty came and went and soon we were rising toward the first real test of the day. Tawonga Gap is by no means challenging, it represents pretty much an opportunity to set the rhythm being very similar to climbing Kinglake. Lloydy eased up for me near the top so we could “rest on the bike” down the other side rather than stopping, which saved 15 odd minutes compared to 2011. The fact that the previous attempt had actually been some 30 seconds quicker told me not only was I managing to quell any nerves, but I had clearly gone out a bit hard last time for an average level of fitness.

As always, knowing what lies ahead provides at least some measure of comfort and the plan was to be up and over Buffalo, back on the relative flat by 11.30am. That was until we started the climb some 22 Ks before I had planned.
With plenty of company, off we went and as we neared the half way mark some 10ks in, Lloydy was creeping away again but I had no plans to match his pace, just try to keep him in sight. As the foliage thinned, the day cleared and again the gap narrowed as we scored the second of the Peaks, with only a short cruise to a well earned stretch and much needed water some 94Kms in. Buffalo was clearly no Hotham and the hour or so saving for the 2013 route meant we were tracking extremely well compared to the 13 hour cut-off. On the way down the view was truly worthy of the word awesome but the sun was already burning off any moisture that dared surface and most importantly, the bike was now handling me well.

Had the mobile been functional I expect I would have been bought to tears much earlier by my daughter’s text which read:

“Ok dad you have about an hour and a half to get to the top of this incline, the biggest of the day, after this you get to relax down the other side!! So get up it, just stick to the time you want, and with Lloydy, and you get a bit of a breather on the otherside

How else was I going to respond to that?

You see, she had some fair idea of what it takes to overcome the mind game having come off on Day 3 of 2011’s Great Vic. ride. She had to coordinated the repair of her bike, on a badly twisted ankle and fronted up for 114Kms the next day, completing it in blazing heat. Hardly Herculean perhaps, but enough to understand.

The legs were feeling it as we headed towards Porepunkah but we managed to
settle into the high 20’s, and the designated lunch spot before 12.00, 120Ks in the bag. With no need for the change of clothes we had forwarded on, it was more water, more food, more stretching and some shade. For 3 Peaks Bicycle Network Victoria had organised a crew of elite riders “The Domestique” to lead out at various time intervals with the “Lantern Rouge” being the last to finish at the 13 hour mark. Kevin, whose face I recognised from one torturous “Tour De Eltham” years earlier was set the 10 hour 30 minutes job, so given we left 15 minutes before his planned departure, we were tracking well ahead.

There comes a moment when your potential ignores the probable and as chance would have it, the 20 odd Ks to Oven saw us tag on to a group of 30 year odds who were punching out a respectable 35kpm on the flat. Buoyed by our time in hand perhaps, (which makes absolutely no logical sense) and a misplaced sense of duty, we started to share the rotating, with Lloydy upping the pace to over 40. Now, with over 100 Kms to go, the last 30 odd up hill, on a day that was well over 30 degrees, the inevitable resulted.
An average of some 37Kph for 19 Ks was to take its toll as we headed East, for the long route back to Mount Beauty.

The first water stop couldn’t come quick enough and half a bottle poured over my head was bone dry in 10 minutes. It was open, bare and blazing, some Garmans reading towards a reflective 50 degrees.

The frustration of pack riding was too much to take with slow down hills and quick ups, so I found a pace that let me make the most of the contours, chopping and changing with small groups along the way.

The first road sign I noticed said “MB50″ and some significant time later as we all started to melt, the next inverted triangle on a post came into view. The thought: “OK, keep going, 40 to go” briefly crossing my mind.
“MB45″. Ssshhhit! Happy Valley Road be buggered!
And on, and on, and on it went, with speeds getting into the teens for extended periods, to which the only response was to suck down another sickly goo to get back over 20kph again.

“Come on dad keep powering through! Don’t stop your momentum you’re doing really well! Just make sure you’re not going at it too hard, the aim isn’t to do it the fastest, just being there at the end is the goal! You can do this! Xx 2.04pm”.

The 4K rise over Rosewhite Gap was a welcome relief, not so much because of the break from monotony, but more due to the fact that the foliage thickened providing some much welcome shade, despite the gradient.

We had bedded down for the weekend at a really homely joint, “The Mogul”‘ high up on Falls and were sharing it with a crew from The Freedom Machine (TFM). It was these legends that had made it their goal to provide unofficial drink stops and support throughout the day. As we cornered one more bend, it was their big green and black van that came into sight, with a dehydrated line trailing back down the slope. Lloydy and I regrouped and pushed over the top, on through the next rest area in the blistering heat, still heading for the start of the Falls climb.

We agreed we would pause for the last time at Mount Beauty, but diverted from the official stop and took up residence on the floor of the air conditioned Caltex Station, Mars Bars and Cokes in hand.

I decided it was time to dump the rain jacket I’d been unnecessarily carrying for the last 200Kms and we set off after what was probably the biggest stop of the day, to tackle the 3rd. Peak.

With the comfort of knowing I had some 4 hours in hand to complete the next 30 Kms, I saw no need to stretch myself, but the pace was solid and again the TFM guys watered us after some 12-15Ks climbing.

A few plateaus and hollows followed before we commenced the last push to the top. One of the true measures of character (or insanity) are those 3 Peaks repeat offenders who seem destined to die on their bikes wearing their “2010, 2011, 2012 Finisher” jerseys, so it was great comfort to gradually edge past one so obsessed, as we forged on. Lloydy had visions of some form of sprint finish but managed to restrain himself once more as the temperature and gentle mist started to fall in the rising altitude. I was happy to grind on at 10-12kph, not tempting fate, despite 2011’s near miss fading to the back of my mind.

A short sharper rise, a few familiar bends, and the village came into view across the ridge. Despite my stated intentions, the pace quickened just a little and we saw our wives and co. cheering us in, side by side.

Whether it was Jamie’s last text, “…you’ll smash it…”, my daughter’s blind coaching, the company on the long training rides or my wife’s and my son’s understanding that I needed and moreover “Wanted” to do this, the support I received over the last 12 months was an enormous inspiration.

At times during the last few months I had the distinct feeling that Lloydy’s commitment and approach was as much about me finishing as him clocking up his 3rd scalp and for that, and the focus and drive it continues to foster in me, in all things, I am extremely grateful.

Would have been nice to complete it on the normal route though!